More
Home Learn How to Draw How to Make Drawings POP! 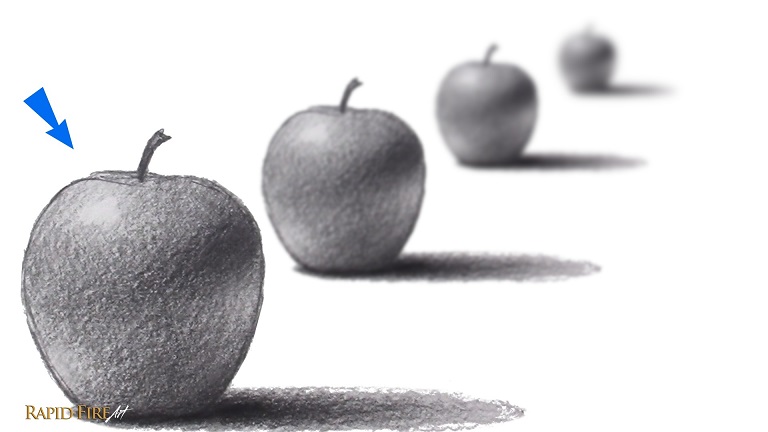 In this tutorial, I’m gonna show you a few ways to give a flat drawing more depth.
Go grab a drawing that you wanna work on and try some or all of these tips to add an additional layer of depth or 3D-ness to it.
Let’s begin!
Video version of this blog post: 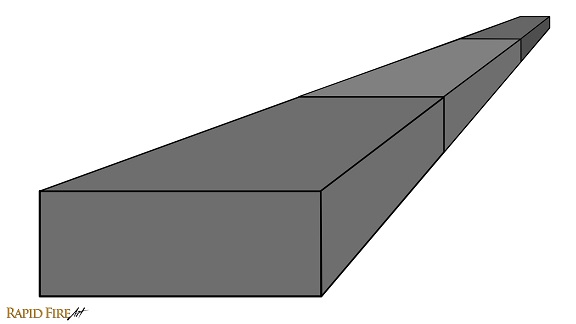 Perspective is used to give the illusion depth or distance on a 2D surface. So by applying it properly, you can push areas far away or pull them closer to you, which helps your drawing appear more 3D / pop out of the page. 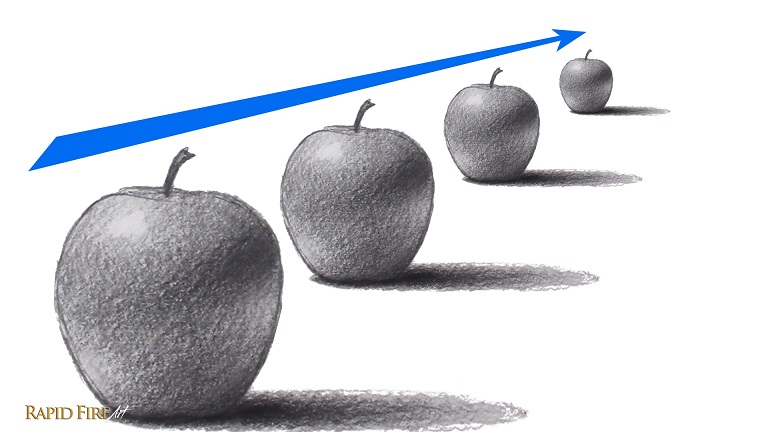 If your drawing is a scene or a subject that recedes into the distance, remember that objects should look smaller and smaller as they move further away from the viewer. To draw a simple scene like this, you can use one-point linear perspective to find out the appropriate size to draw each object.

Just align the edges of your object to a single point in the distance, using a ruler.
Applying perspective properly sets a good foundation for your 3D drawings. For more content on perspective, visit lesson 6 of my beginners’ course.

To heighten the illusion of perspective, just apply some blur to sections of your drawing.
For example, if you want the viewer to focus their attention on only one apple, let’s say… the second one from the left, you can blur all the others and remove some of their detail. Our eyes are drawn to fine details, so the fewer you add, the better. 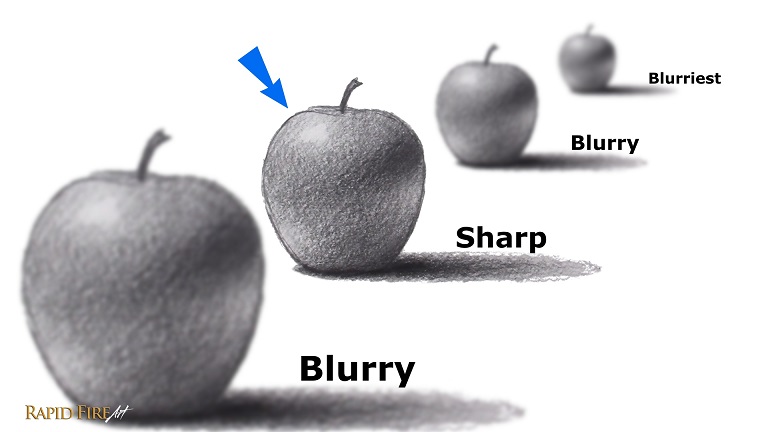 Simply use a soft tissue to smudge the drawing until it becomes blurred.
The further an object is from the main focal point (the second apple), the more blurry it should be. This is very simple to do and it helps to heighten the illusion of depth. It makes far away objects look even further away than they were before. And objects that are close to you will look even closer.
If you want the viewer to focus their attention on the first apple instead, you can blur all the others, leaving only the first one looking sharp:

You have full control over what you want the audience to focus their attention on.
This technique is helpful for differentiating foreground and background objects from each other as well as imply distance. 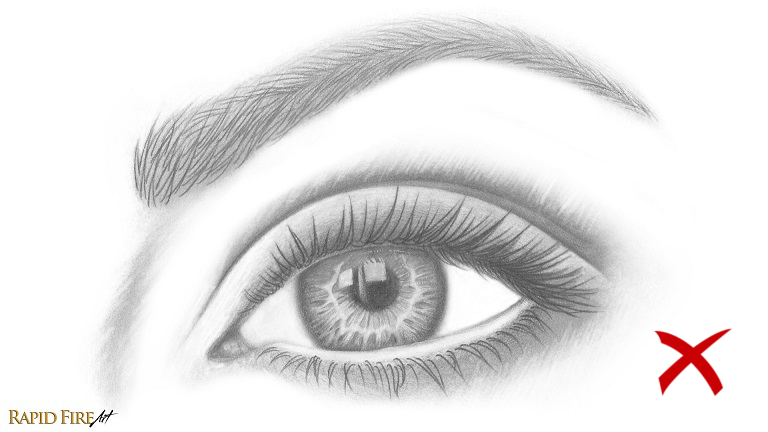 If your drawings usually have minimal shading and contain mostly white or whatever color your paper is (like the image above), it’s going to be very difficult to make it look 3D. 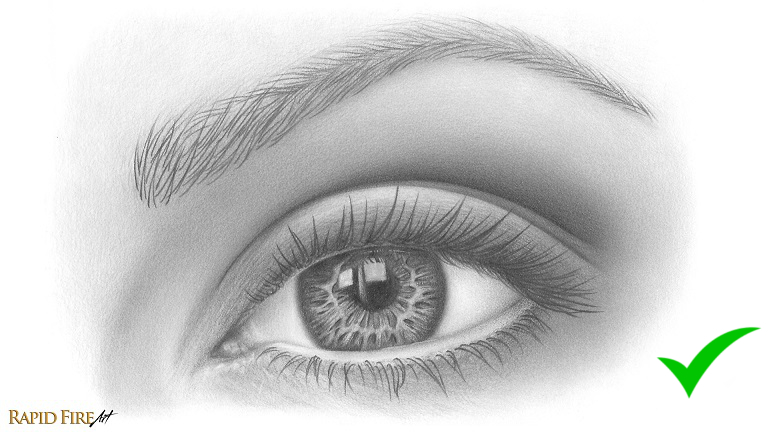 The first thing you can do is get more comfortable with shading the entire drawing, leaving only the brightest areas white or close to white — trying not to let too much of the bare paper show through. If you’re not sure how or where to shade, please click over to my shading tutorial before you continue with this one. It covers the topic of light, which is crucial for realism.

A gradient is a gradual transition from light to dark or the other way around. It can be created by gradually pressing harder or softer as you shade.
Gradients exist because the further something is from the light or the more it turns away from it, the darker and darker it appears… generally speaking. So even objects with flat sides will display gradual changes in light intensity. 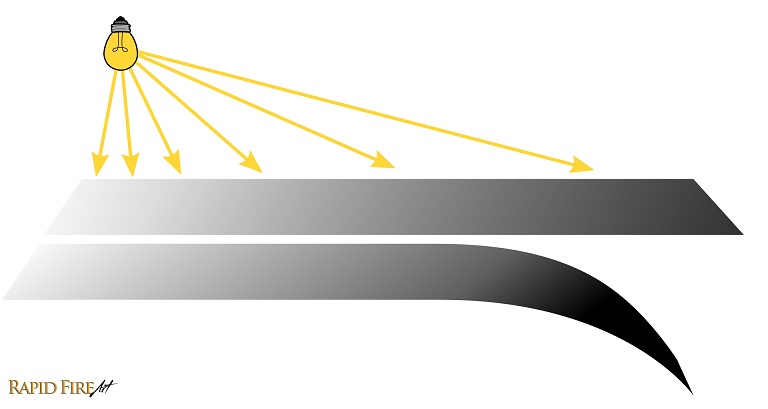 Here’s an example: for most beginners, drawing a deep crease or wrinkle might look like something like the image below — A set of lines on the surface of the skin. 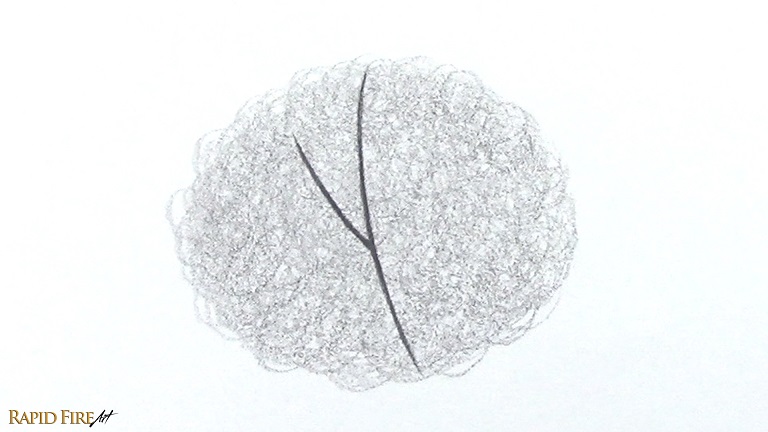 The problem here is that it just looks like a line tattooed onto the skin’s surface.

Because the shading is a solid value, the skin looks completely flat. In order to curve the skin into a wrinkle, we’ll need to make it look as though it’s turning away from the light. This means, the skin should become darker and darker as it approaches the groove, making the transition from light to dark become gradual instead of abrupt. 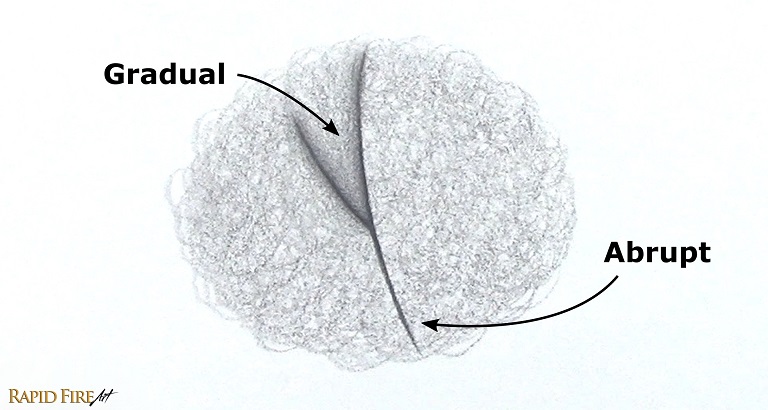 This gradient forces our brain to perceive the wrinkle as a curved surface instead of a flat one.
So simply using lines to indicate wrinkles, folds or creases won’t do. Try to use gradients wherever possible to give all surfaces a more realistic sense of depth.
Don’t forget that the further a surface is from the light, the darker it will be. So even objects with flat sides will display gradual changes in light intensity:

Any outlines in your drawing can make it appear cartoony which takes away from any effort in making it  appear 3D… because in real life, there are no outlines. So make sure they’re erased or try to blend them into their surroundings until they disappear.

Tip #6: Make Full Use of Your Pencils

Here’s an example of a flat drawing. Now, this may look familiar to you if you’re a very light handed artist. The shading looks good but it still looks flat. And the reason is because it lacks value contrast.
Meaning, there isn’t that big of a difference between light and dark. Everything is just a light shade of grey.
Let me pull up a graphite value scale against the drawing to show you what I mean: 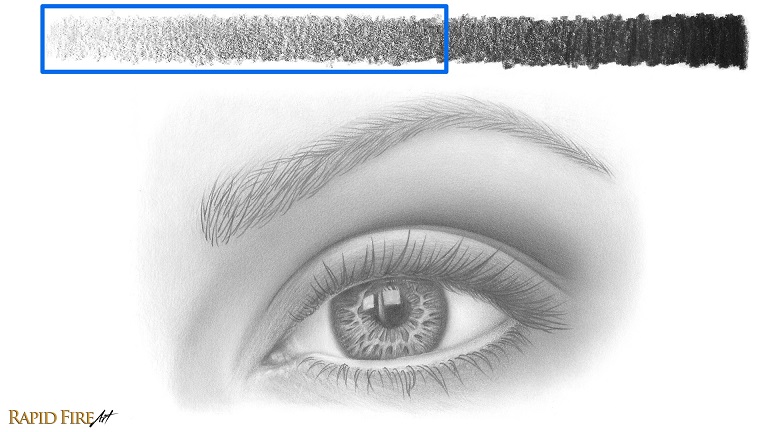 As you can see, my graphite pencil is capable of creating really dark values, but in the image above, only a small range is being used, which is kind of a big waste!

To avoid this, apply a little more pressure while you’re shading or use the same amount of pressure that you’re used to but switch to a softer pencil than the one you’re currently using. That should give you a slightly darker value. 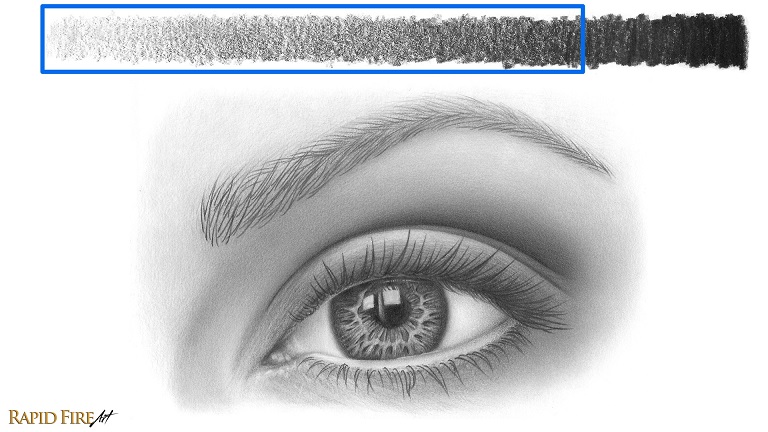 For example, if you’re using an HB pencil, switch to a softer one like a 2B or even 4B if you want.

When you shade with a softer pencil, your drawing should come out looking darker than it normally would. When you make this change, you’ll start to see your drawing take on a more 3D form. 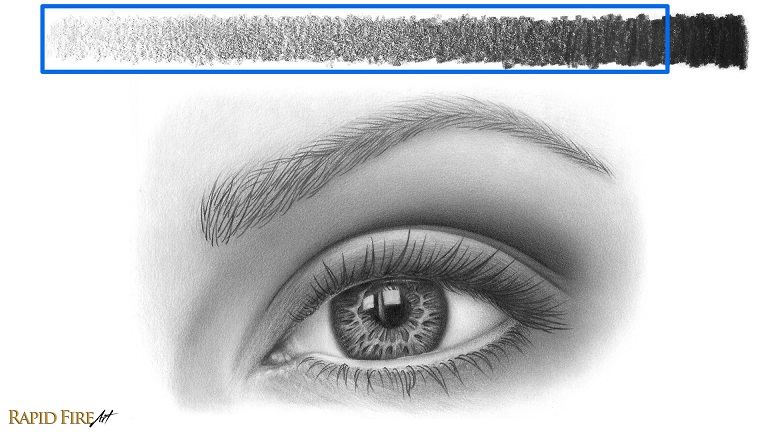 So simply shading darker in general will create a more impactful drawing that’s much more interesting for your viewer to look at. As I increase the contrast, the drawing becomes clearly a few shades darker than the paper, which really helps to set the drawing apart from the background.
I like the overall level of shading that it has now. But it’s still not popping out of the page.
To add more depth, I’m gonna look for specific areas across the entire drawing where I can exaggerate or deepen the values without making it look unnatural. This requires some understanding of how light behaves. If you need a refresher, the shading tutorial is just a click away.
I’m gonna go for areas that are sort of hidden from direct light and reflections.
Darkening such areas can push parts of your drawing further into the background.
Here are a few examples.

Darkening crevices and nooks can push them further back. But you do wanna make sure it’s not over done. So work in layers, adding more graphite just a little bit at a time so you can save yourself from erasing later on.

Cast shadows, especially ones on dark surfaces are great areas to exaggerate.
You might have noticed a very subtle cast shadow along the part of the eyeball that’s directly below the top eyelid. I’m gonna exaggerate the darkest area along it which happens to be the iris. 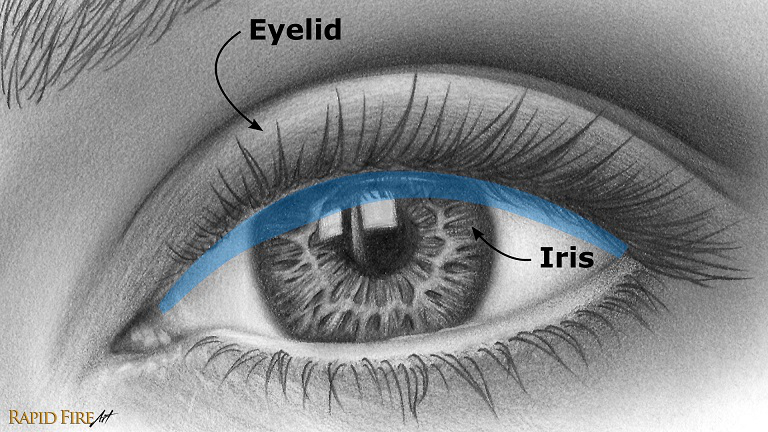 There is a slight cast shadow here to begin with. Let’s see what happens if I add some darker graphite.

Now, the iris looks deeper, and even though I didn’t touch the top eyelid at all, it looks as though it’s been pulled towards us.
I know the changes between each image are very subtle. So if you wanna view it more clearly, please watch the video version of this tutorial: click here to watch it on Youtube.

If you’re drawing from your imagination, it really helps to understand some basic anatomy :)
For this example, I know I can shade the pupil much much darker because it’s actually a hole in the center of the iris that absorbs light. So it should appear very dark. It doesn’t look like a hole right now, but that will change as soon as I shade it some more:

Not every drawing needs to have such dark shades/values in it. Just do whatever is right for your specific drawing.
Looks like I’ve covered all the values in my scale… 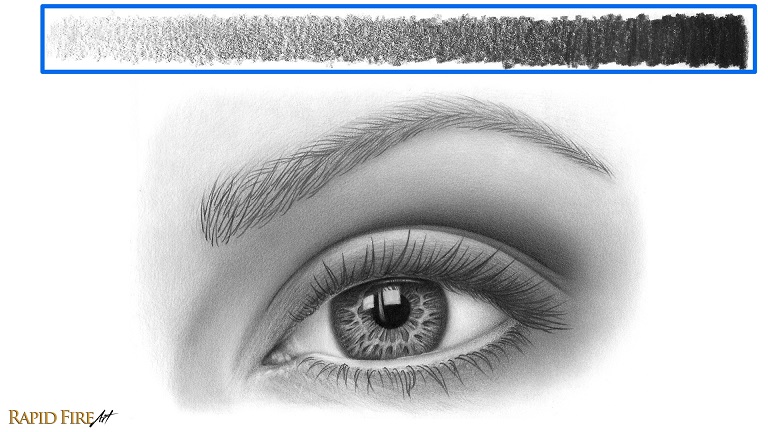 You might have noticed that after adding all these dark shades of grey, the eyelashes and eyebrow look much lighter in comparison to the rest of the drawing, making the entire drawing look rather bland and uninteresting.
Dark values can create interest. guiding the eyes to look wherever you want them to. So to give the drawing more… of a balance, I’m going to darken the eyelashes and eyebrow as well: 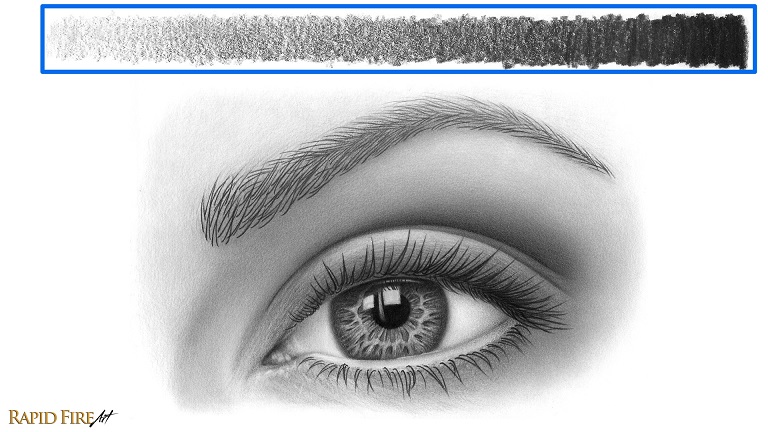 That’s much better!
Now I’ve made full use of my graphite pencil by including all the shades it can possibly create. Of course you don’t have to use all the values in the scale, but it does make the drawing look a lot more interesting.
So… we’re done right? Not exactly!
We traveled far over to the right of the scale, but there’s still another value on the left, and that’s white! 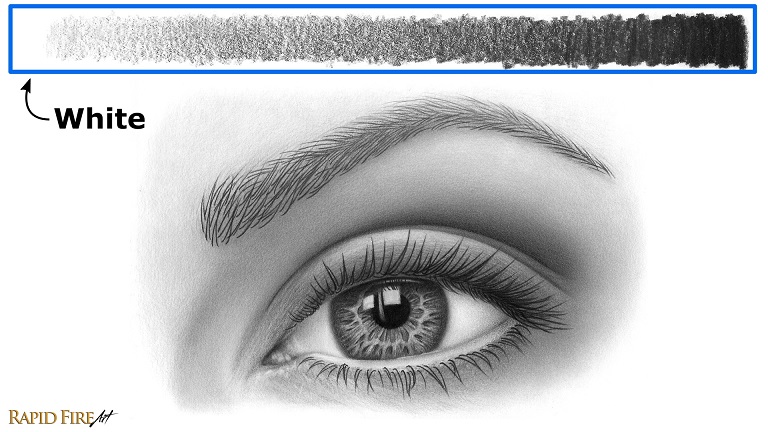 If your drawing contains a lot of white areas already, this might not create much of an impact.
Okay, so here are a few areas that could use some brightening… these shiny, wet surfaces reflect a lot of light, so turning them white or close to white will make them pop, immediately:

Use an eraser to remove graphite in such areas. I like to use a kneadable eraser for high precision. For a very bright white, try correction fluid/white-out.
Use your dark and light values to continue to push and pull your drawing further. If your drawings doesn’t have any wet/shiny surfaces, just brighten your highlight further. When you do this, it helps to know where the light source is coming from so the patterns of light make sense and look as convincing as possible. Click here for the shading tutorial, if you need a refresher. In the image below, the ribbons in the eye, spokes and eye whites have been lightened, among others.

Here’s a comparison between the drawing before and after:

Well, that’s it guys!
If you have any questions, leave them down below and if you have any before and after photos, I’d loooove to see them!!

Want to download a FREE PDF version of this tutorial for offline viewing or printing? Please share this page with your friends using the buttons below to unlock the PDF. Thank you!Alternatively, you can purchase ALL my tutorials in PDF form at once, for a small price. Click here for more info.
FB Like
Facebook Share 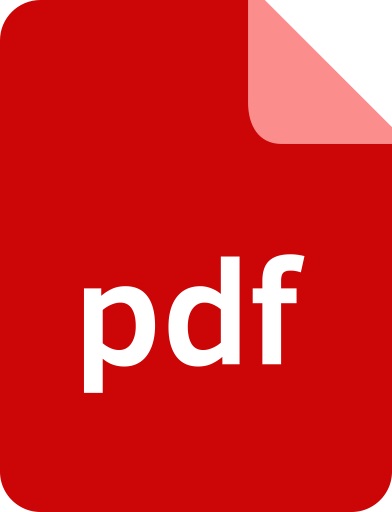 😊 Thank you for sharing! 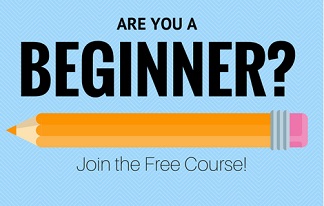 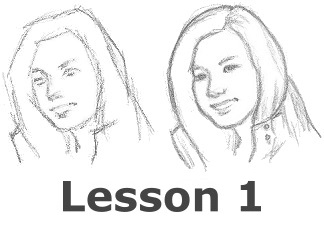 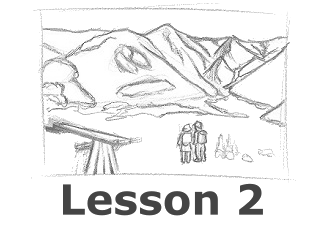 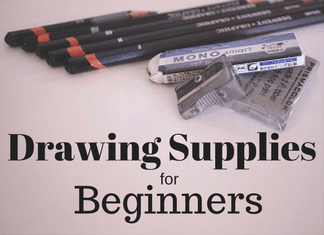 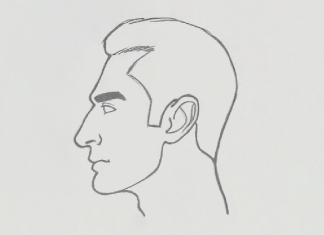 How to Draw a Face from the SIDE (Loomis Method)

How to Draw a Face from the FRONT (Loomis Method) 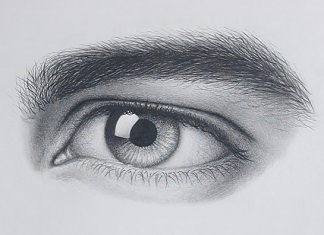 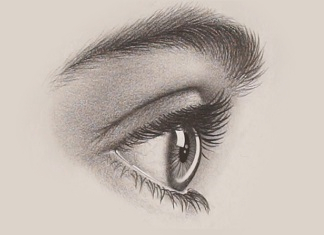 How to Draw a Realistic Eye From the Side 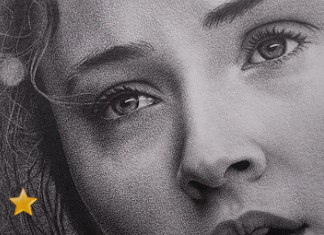 How to Shade a Face