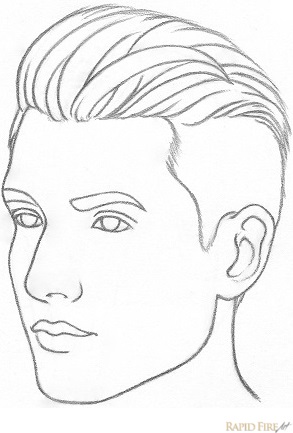 *This is an exclusive tutorial*

Darlene here with another awesome tutorial! Wanna learn how to properly draw faces from the 3/4 view? Let me show you how in 11 easy steps.

If you enjoyed my other two face drawing tutorials, you’ll love this one as well!

UPDATE: I wanted to add more value to this tutorial, so I added another section at the very end so you get two tutorials in one! The first part is how to draw a male face from the 3/4 view and the second (bonus section) is for the female face.

The second part includes additional information which you can also apply to drawing male faces as well. 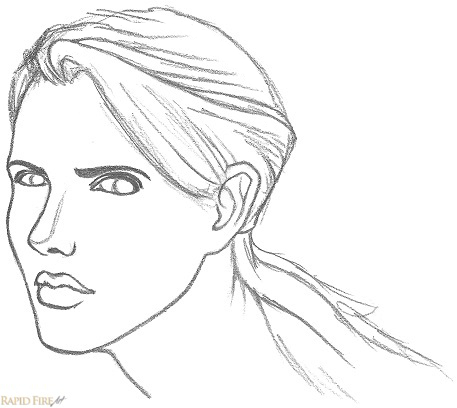 This tutorial will help you:

A word of advice before you start: Try the tutorial at least 3-5 times before you throw your hands up in the air and give up. 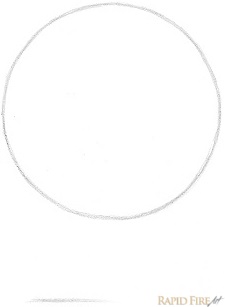 Using an HB pencil, draw a circle. Then draw a small line at the bottom to mark the bottom of the chin. This line should be roughly 1/2 the diameter of the sphere.

For your personal offline viewing, click the following link and hit the download button beside the printer icon to download the PDF: RapidFireArt Tutorials-How to Draw a Face Three Quarter View 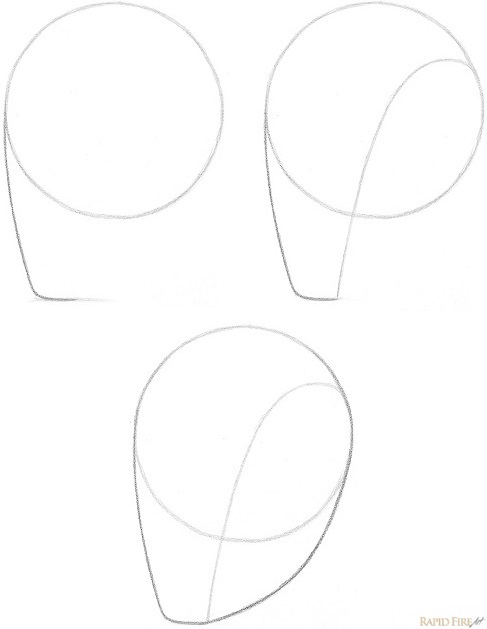 Using a 2B pencil, connect the left side of the circle to the chin. Just a simple curve. Details will be added later.

Using an HB and then 2B, draw a raindrop shaped loop that starts at the chin and wraps around the right side of the circle and ends back at the chin. 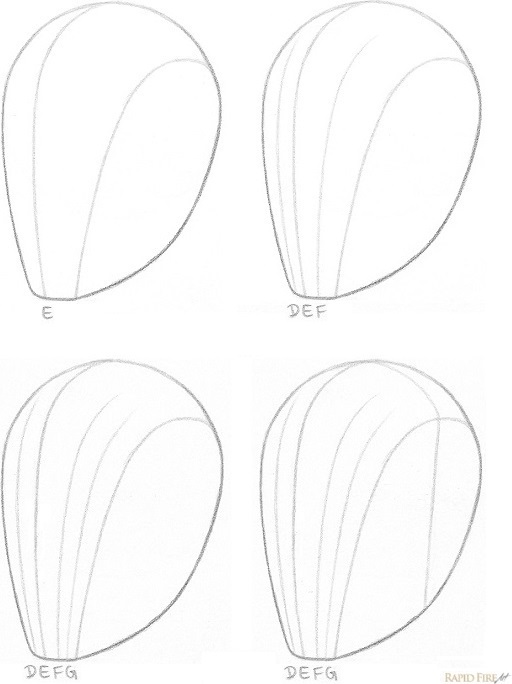 In this step, we’re going to draw 4 lines down the front of the face and 1 line down the side with an HB pencil.

Add another line between line F and the right outer edge of the face (labelled line G).

From the highest point of the raindrop shape that marks the side of the head, draw a line going all the way down to the jaw. 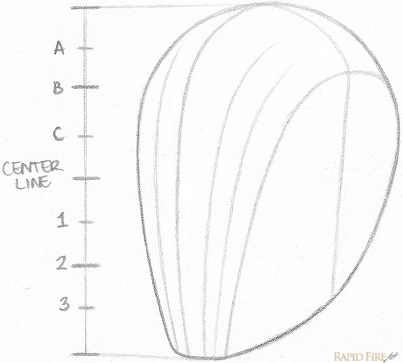 This step is optional. I highly recommend it for your first few tries or until you are able to somewhat accurately eye the measurements. Draw a ruler beside your drawing and put ticks on it, separating it into 8 equal sections.

With an HB, make 3 small ticks on line E where ‘Center Line’, line 2 and line 3 intersect.

Then draw lines across the face. Make sure your lines wrap around the face’s curvature.

For all the facial features, use a 2B. If you’re drawing guidelines, use an HB with very little pressure.

Draw your nose in the center of the face between the first 2 lines you just made (Center Line and line 2).

For an average sized nose, keep the width of your nose close to line D and F.

To draw eyebrows in the resting position, place them below line C. For a surprised expression, venture on or above line C.

Make a triangle that sits on line 3 and reaches up to the base of the nose (the base of your nose may be different from mine).

Keep the width of your lips on/between lines D and G. The corners of the lips should line up perfectly with the center of the eye above it. 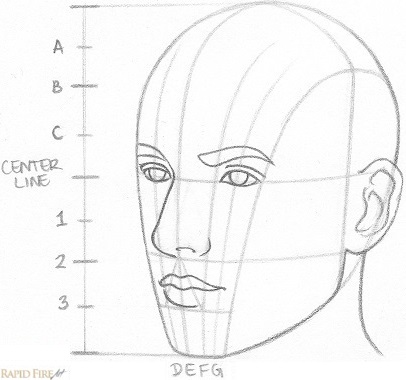 On the side of the head, draw the ear starting on the ‘Center Line’ and Line 2.

Draw the neck as well. Make sure it lines up with the head’s outline. 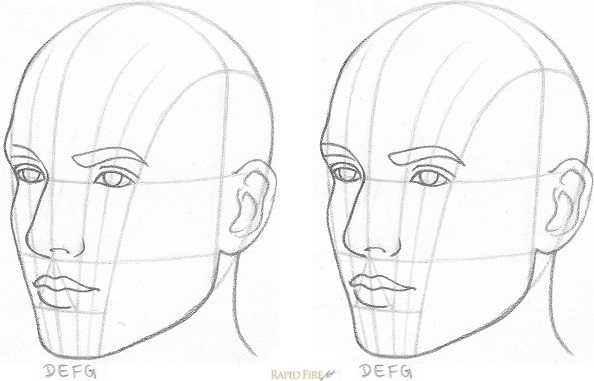 Let’s give the left outer edge of the face a lot more shape. Define your brow bones, cheek bones, chin and jawline.

Your left eyebrow and/or eye will need some touching up, so extend your lines to the new outer edge of the face. 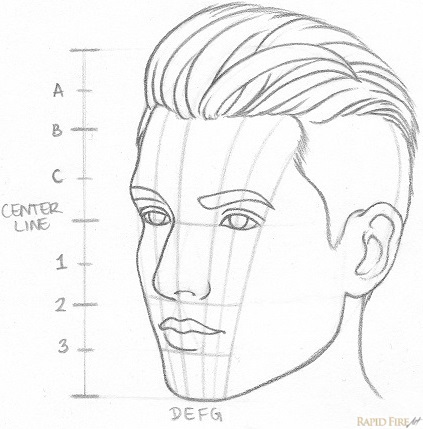 I love this part! Between lines A and B, draw the hairline. For a receding hairline go above line A.

Draw the hair far away from the outline of the head to give the hair some good volume.

Erase all your outlines and you’re done! This is one of the rare times I use a hard eraser because it’s difficult to erase large areas with a kneaded eraser. The kneaded eraser is great for erasing between tight spaces and erasing close to any part of the drawing you want to keep.

I encourage you to practice this tutorial a few times with the ruler until you are comfortable to go freehand.

Bonus Tutorial: How to Draw a Female Face (3/4 View)

This bonus tutorial uses the same method as the one above except there are a few changes in each step for the female face. I’ve also added some unique differences like the iris position and body position so you guys can get even more out of this section.

Note: If you skipped all the way to this section, please follow the first tutorial before you go to this one because you might get lost. 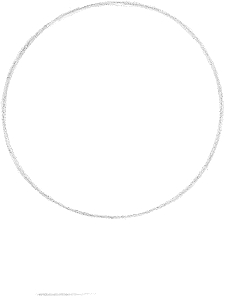 When you draw the circle and horizontal line for the chin, you can draw the line a little higher than you would for a male face (much less than half the vertical diameter of the circle) because the chin could turn out appearing too strong.

For this example, I’m using pretty much the same guidelines as the first tutorial.

I’m skipping the other steps because it’s already covered in the first tutorial.

I like to draw female noses much shorter than males. In the first tutorial, the nose’s base touched Line 2, while this nose is shorter and a little more narrow.

Females have wider eyes in general, but when you draw them, avoid over-doing it. If you’re struggling to draw feminine eyes, a darker outline around the top and bottom lid can do wonders.

I decided to change the iris position this time around so the character is looking straight at us. At this particular 3/4 angle, the edge of each iris lines up perfectly with Line D and G (or the center of the eye).

I like to draw the eyebrows thick to begin with and then narrow at the ends while also ensuring that they’re curvy. You may have noticed how close the eyebrows are to the eyes. This gives the character a more intense expression, while the character drawn in the first tutorial has a more relaxed expression.

If you want to draw someone that looks surprised, widen the eyes and draw the eyebrows as high as Line C.

For the lips, draw a triangle from the base of the nose to Line 3. If you need a refresher on how to draw lips, click here. Females tend to have larger, fuller lips than males, so I tired to make full use of the space between Line 2 and 3.

Step 5: Shaping the Face and Chin

Now we’re going to define the left side of the face.

I wanted to give this character an intense expression but at the same time, I don’t want her to look masculine. If you’re like me, be careful not to put too much emphasis on the brow bone. I kept my lines as close as possible to the circle that I drew in step 1.

You can introduce some extreme curves below the eyebrow. For example the eye socket or the cheek to make it look full.

For the chin, you don’t necessarily have to follow the guidelines. If you look closely, I deviated from the guidelines and drew a rounder and slightly more narrow chin as I saw fit.

For the jawline, I kept it as smooth as possible. There are many females with strong jawlines, so you don’t have to follow exactly what I’ve done here. The fun thing about drawing faces is that you can mix and match.

Around the CENTER LINE and Line 2, draw the ear. You’ll notice that this character has higher ears than her male counterpart. The thing about ears is that the position isn’t always the exact same from person to person.

Once you’re done with the ear, draw the rest of the head. Again, head shapes vary from person to person as well. The back of her head comes out more than his.

The neck drawn here indicates that she is turning around to look at us. A big giveaway are the wrinkles at the back of her neck which is twisting the skin from the bottom of her head in the opposite direction as the rest of her body.

When drawing hair that’s tied up you still want to make sure that the hair outline is not touching the scalp so the hair appears to have more volume.

When you’re happy with your drawing, erase all your guidelines using a hard eraser (electric eraser to save time) and a kneaded eraser to get into the tight spots. 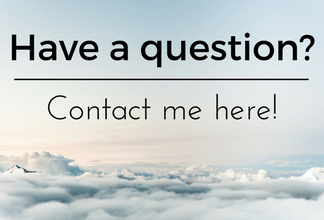